← Back to News & Updates

In a quiet rule change, but an important one, the IRS has told tax preparers and software firms that it won’t automatically reject tax returns that fail to state whether the tax filer had health insurance during the year. That effectively loosens enforcement of the ACA’s individual mandate. It appears to be a direct response to Trump’s ​Jan. 20 executive order requiring federal agencies “minimize...the economic and regulatory burdens of the Act.”

The executive order could cripple ACA insurance exchanges, not only by signaling the Trump Administration’s open hostility to Obamacare, but by kicking a leg out from the regulatory stool supporting the act.

The IRS action its the first manifestation of that. The agency hasn’t announced its rule change publicly, but it was picked up by Peter Suderman of Reason and Kathleen Pender of the San Francisco Chronicle, who both reported it Tuesday.

In an emailed statement, the IRS said that it was acting in direct response to the executive order, which it said “directed federal agencies to exercise authority and discretion available to them to reduce potential burden. Consistent with that, the IRS has decided to make changes that would continue to allow electronic and paper returns to be accepted for processing in instances where a taxpayer doesn’t indicate their coverage status.”

The ACA requires individuals to carry health insurance or pay a penalty of as much as $695 per adult and $347.50 per child under 18. Line 61 of IRS Form 1040 requires taxpayers either to check a box certifying that family members had coverage during the year, or to enter their penalty, which is calculated on a separate form.

Starting this year, the IRS was planning to reject returns automatically that left line 61 blank, known in agency parlance as “silent” returns. That would give taxpayers an early warning — for electronic filers, an almost instant warning — that they might be in violation of the individual mandate.

But early in February, the agency told tax-preparation firms that it was reversing the rule and would continue to accept returns that were blank on line 61. The agency didn’t announce its policy to the general public, but word spread rapidly in the tax-preparation community. Drake Software, which produces tax preparation software for accountants, posted a ​notice of the rule change on Feb. 9 and updated its program to allow for e-filing of client returns without filling in line 61.​ 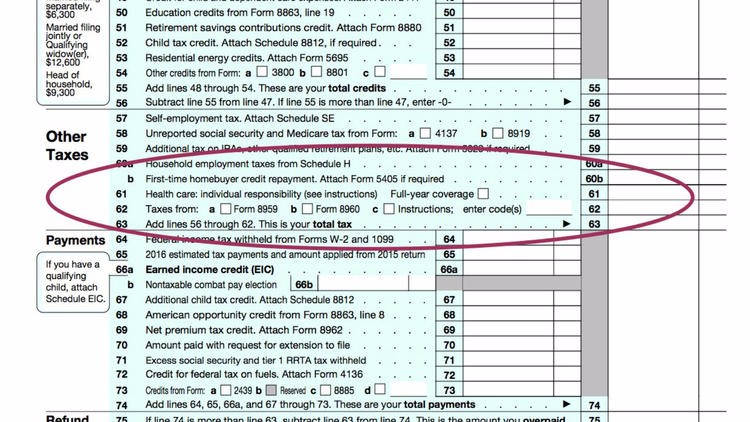 ​Line 61 of Form 1040 requires taxpayers to declare their insurance coverage or calculate their penalty. (IRS)

​​​The IRS statement notes that its rule change doesn’t alter taxpayers’ responsibility to obtain health insurance and pay any penalty for noncompliance: “Legislative provisions of the ACA law are still in force until changed by the Congress, and taxpayers remain required to follow the law and pay what they may owe‎.” The agency says that although silent returns won’t be automatically rejected, they may eventually be questioned by the agency and the penalty assessed. Drake Software advises its users to remind their clients that those leaving line 61 blank “could receive communication from the IRS, experience delayed refunds, and face subsequent collection activity to recoup the individual shared responsibility payment.”

The practical effect of the IRS rule change is impossible to gauge. Tax year 2016, for which the standard filing deadline is this coming April 18, is the first year for which the agency was planning to reject silent returns. Last year, ​according to the National Taxpayer Advocate, penalties averaging $452 were reported on 6.1 million returns, with another 12.2 million claiming exemptions from the mandate.

Confusion over Republican plans for the repeal of the Affordable Care Act already has roiled the individual insurance marketplace. Humana, which covers 150,000 ACA customers in 11 states, announced Tuesday that it would pull out of that market entirely next year. Aetna, which already had reduced its individual customer base to about 240,000 this year from 965,000 at the end of 2016, also has signaled that it may be entirely out of the market starting in 2018. Aetna cited the uncertainty about the market’s future coming from the Trump White House and the GOP-controlled Congress. Aetna and Humana had been planning to merge, but their deal was blocked by a federal judge in January.